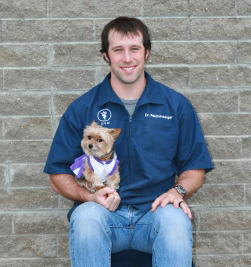 Lance grew up in Wichita, Kansas and graduated from Bishop Carroll High School in 2003. He attended Pittsburg State University on a track and cross country scholarship, where he received his undergraduate degree in Biology in 2007. During his free time in high school and undergrad, he worked at his uncle’s veterinary clinic learning the tricks of the trade. He then went to the Kansas State University College of Veterinary Medicine from which he graduated in 2011. Lance married the love of his life Megan and gained the four-legged love of his life Dotty. Lance and Megan have three children – two sons named Henry and Owen, and a daughter named Quinn. Lance grew up around a lot of animals, but his two favorites growing up were his dad’s hyper Parson Russell Terrier, “Zach” and his grandma’s stray cat “Bo Bo Kitty”. In Lance’s free time, he enjoys mountain biking, wakeboarding, and snowboarding.